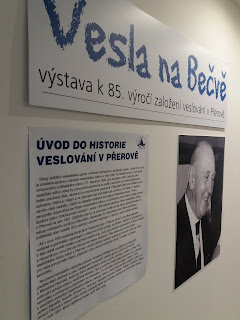 The rowing sport was first introduced in the Czech city of Přerov in 1932. The local rowing club has organized an exhibition to mark the 85th anniversary.
Read more »
Published by Remigatio v 8:51 PM No comments:

Email ThisBlogThis!Share to TwitterShare to FacebookShare to Pinterest
Categories: Czech Republic, eight, rowing in the media and culture

While the Guardian focused on the Serbian men's coxless pair boat flipping in the unstable wind conditions, the CNN re-aired an older report featuring the Angolan lightweight men's double scull that had secured the African nation the first Olympic rowing appearance ever.
Published by Remigatio v 7:45 PM No comments:

A number of videos on the web show how the current Olympic rowing venue looked like some time before the Olympic buzz went off. Here are just some of them.
Published by Remigatio v 6:59 PM No comments:

Email ThisBlogThis!Share to TwitterShare to FacebookShare to Pinterest
Categories: Brazil

Currently hosted by the rowing venue in Račice, Czech Republic, the 2015 European Rowing Junior Championships was kicked off on Friday, 22 May with a show of coastal rowing boats. A video from the exhibition race was uploaded on YouTube by the Czech rowing legend, the multiple international events medalist Václav Chalupa:
Published by Remigatio v 12:37 PM No comments:

However absurd the title above may sound, it was reality on Friday, 20 September: in a race of varsity eights, the crew of the British university competed against men's lineups representing a number of Czech universities and colleges. One of them, of Prague's Charles University, was reinforced by the Olympic champion in women's single sculls, Mirka Knapková. The race was taken by the Czech Technical University followed by Cambridge, the Czech University of Life Sciences, Charles University, and Prague University of Economics, respectively.

Video from the finals of the main race at Prague Mayor's Eights regatta on Sunday, 22 September

Knapková said the men's varsity one-kilometre race was rowed in the fastest pace she ever had to cope with in her life. "The boat runs in a different way and lets you feel the strength and speed. But then it is remarkably harder in the single - it makes you think the boat is standing still", told the top Czech female rower the Lidovky.cz news website, affiliated with the Czech nationwide daily Lidové noviny.

Flood Does Not Spare Czech Rowing

As already reported widely in the world media, the western parts of the Czech Republic have struggled with swollen rivers in the recent days. Floods have also hit neighbouring countries – Austria, Slovakia, and Germany.

As for the Vltava river that runs through the Czech capital Prague, the flood reached its peak on Tuesday, 4 June, and the flood danger has since been imminent down the stream, on the Labe (in German: Elbe) river.

Although the water volume stayed below the historically record 2002 flood in most of the affected areas, several rowing clubs have been damaged too.

Set up by Czech rowers, the Facebook website “Veslaři a povodně 2013” (Rowers and the 2013 Flood) monitors the situation. Photos of the flooded boat parks are being posted and offers of a helping hand released. Screenshot of the Facebook flood help group for Czech rowers

Last year’s Olympic winner in women’s single sculls, Czech Republic’s Mirka Knapková had to walk a more difficult path to gold than it might have looked. As the media in her homeland intensely discussed after the victorious race, she had gone through the whole Olympic regatta with an injury.

Knapková’s progression at Eton Dorney looked as clear as it could be: she won her heat (on 28 July), quarterfinal (31 July), and semifinal (2 August).

But, at the start of the A final (4 August), Czech Television’s commentator Pavel Čapek revealed to the audience that the Czech sculler “was fighting serious health problems”. It turned out that there was a problem but only Knapková’s close circle knew about it, including a few journalist fellow-countrymen – and they decided to keep it secret so that the sculler does not get distracted by media attention and her rivals are not granted psychological advantage.

As rowing observers (including Czech men’s sculling coach, Milan Doleček Sr.) pointed out, it probably was due to the health challenge that Knapková reached the perfect concentration and her rowing style became simpler and more economic.

“Being close to such an achievement will stay inside me until the end of my life,” says Czech physiotherapy doctor Pavel Kolář who helped the rower in her critical moments. In an interview published on the Czech news website Idnes.cz (affiliated with a broad-circulation daily, Mladá fronta Dnes) on 27 December 2012, Kolář remembers how he was called to help after the heats of women’s singles: “The whole of Mirka’s shoulder-blade hurt. Even my intervention didn’t show any remarkable improvement.” An MRI screening indicated a torn shoulder-blade fixator.

Read more »
Published by Remigatio v 12:34 AM No comments:

Search in This Blog (Vyhledávání)

Remigatio
Praha (Prague), Czechia
Can you feel the rowing stroke in every breath, every heartbeat, every step, every wave of wings, every grumble of a train...? It moves you forward but you cannot see the direction. What you focus on is the recent past, from which you can presume where you are heading. Rowing is a mirror of life – Remigatio Speculum Mundi. (Profile image © Zinda Magazine, 2000. Contact: remigatio [at] gmail [dot] com)